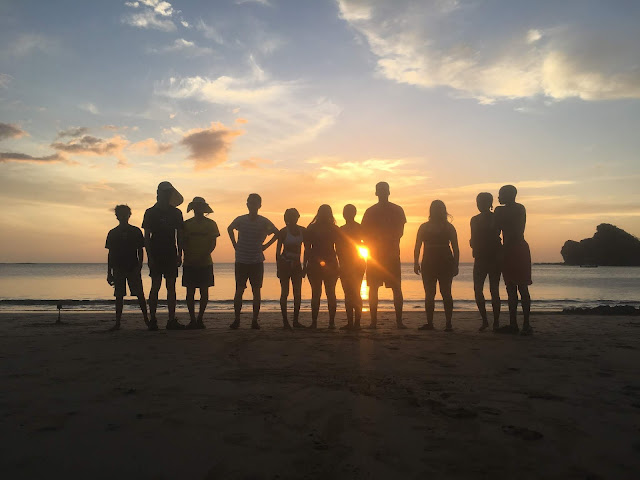 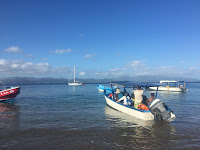 Today was our last day in Costa Rica and we started off the day bright and early at 6am. We woke up and had breakfast with our families. Then we met up and took the car to the beach. We sailed to the turtle foraging grounds where we saw many animals such an octopus, puffer fish, and even a green turtle which curiously are found on the foraging grounds but do not lay eggs on the beach. We sailed back and were allowed to have some down time before we went to the beach and watched the sunset.

At 6:30pm we went to the barbeque and had our final meal at Kembly’s place. 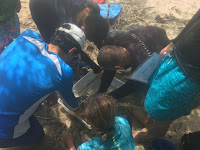 Today we spent the day snorkeling and catching rays where Pablo, Nayan, Robert and others caught rays.  We also cleaned the beach and collected data based on what we found.  Later, we learned about the daily flight patterns of local yellow naped parrots.  Every day, the same birds fly south from their foraging grounds in Nicaragua to their nests in Costa Rica.  We counted 87 birds in 1 hour.  After dinner, we went night patrolling for turtles and learned about some of the effects that light pollution can have on turtles trying to lay their eggs.

We are excited to share more about our experiences in person when we get home!

Today we spent our last day at Finca La Anita where we presented our final projects. After a morning of hard work, we headed to El Jobo for our next journey. We traveled for a long time, but enjoyed beautiful views Costa Rica has to offer and stopped at a local grocery store. When we arrived in El Jobo, we were greeted by our "Mama Ticas" who we will be staying with for the next two nights. The homestays are directly integrating us into this close knit community, who are all working to learn about their environment. We conversed over dinner and learned about the work we will be doing with turtles, rays and parrots over the remainder of our trip. After preparing for the work ahead of us, we headed to bed for tomorrow morning of cleaning the beach, catching rays and turtle watching.
Ava & Pablo 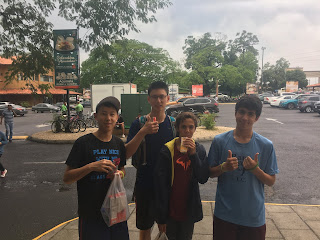 Posted by SG Science at 7:44 PM No comments:

Today after we had a delicious breakfast, we were on to a full day of science. In the morning we observed and analyzed the results of our experiments and continued to work on our presentations for tomorrow. We went to a hike and took a picture of all the SG students standing in the middle of a creek. We almost lost our footing on the slippery rocks, but we all managed to survive. In the afternoon we continued our preparation for our presentations. After dinner, we listened to a presentation regarding our further involvement in the SOC program. This program will be very beneficial to our future, especially if we want to pursue a science career. The night ended with Allan finding a tree frog and our finalization of our presentations tomorrow. Tomorrow we will be heading to El Jobo to observe rays and sea turtles. 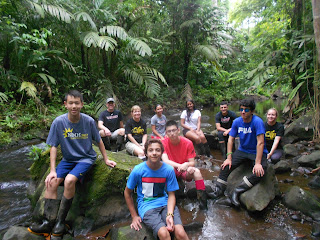 Vincent and Nayan
Posted by SG Science at 8:28 PM No comments:

Today started off early with a morning hike at the foot of a volcano. At the end of the hike we were greeted by hot springs which smelled like sulfur. Some brave souls also went down to the waterfall, where the water was much cooler and deeper. At its deepest point it was about 9.5 feet deep!* "This by far has been the best part of the trip so far. Just swimming under a waterfall in the  middle of the rain forest was a great experience" -Carter. We also saw many animals such as an eyebrow viper, spider monkeys and many frogs/toads. 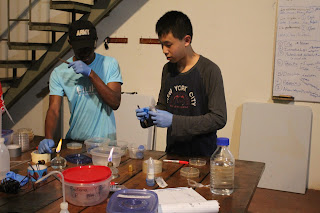 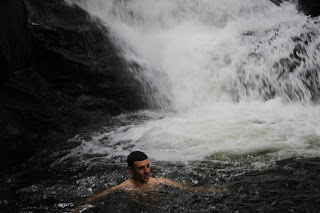 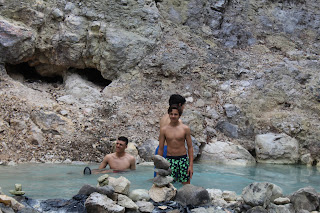 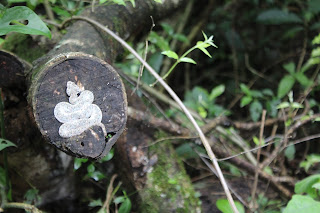 In the afternoon, we were working on our projects for the rest of the day. Most of our trials were successful and all of the groups got a lot of work done. We also saw a nuptial flight of termites which made Robert go on a killing spree at dinner, having a kill rate of 10, which he is also very proud of.

-Robert & Carter
*At the waterfall there were 3 certified lifeguards (Beth Hunt, Warren Williams, Holly Williams)
Posted by SG Science at 7:18 PM No comments:


The day started off with a delicious breakfast of rice & beans, eggs with ham, pineapple and watermelon. We departed the ranch to go horse back riding through the mountains. During our adventure we crossed rivers, faced our fears and became expert riders by the end. Following horse back riding, we completed service with the Women's Association by planting and digging for their butterfly garden. Students were then able to buy jewelry, which is currently their only source of income. We headed back for a great lunch and began the preliminary trials for our final experiments. After a long evening of working on our projects, we ended the day with a night hike and headed to bed for our early morning of hiking along Costa Rica's volcanoes.
Ava F. & Rhyan P. 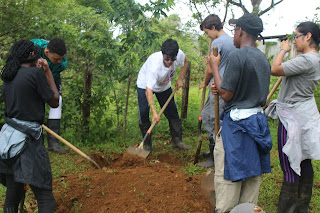 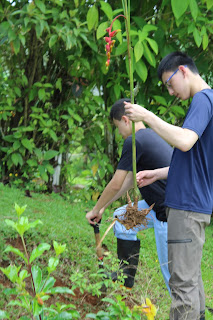 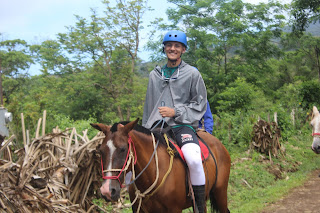 Posted by SG Science at 8:02 PM No comments:

Today was all about science. It started, ended, and progressed with it. Our day was sparked energetically by breakfast at 7:30, with eggs, chocolate nib pancakes, and delicious juice. The science began at 8:30. Dr. Pinto led the teams through an Escovopsis experiment, in which we investigated where the fungus is most present in ant colonies. Our group decided to sample from the middle, top, and bottom of the ant colony. We transferred these samples to a petri dish, where the fungus could reproduce, and the growth could be tracked. This experiment afforded us many much-needed trips to the only AC room in Finca La Anita - the home for the ants. After completing the experiment, we split into our groups, and started to decide what question we would investigate for our experiments. After putting serious thought into this and determining a preliminary research question, we stopped for lunch, and resumed at 2:00 PM. It was during this time that we continued research and solidified our proposal presentations. We later enjoyed delicious chocolate cake and hot chocolate for Leslie's birthday. We reunited for research, finishing and practicing our proposals. Dinner arrived with excellent fish and tasty potatoes, and the presentations began. As groups, we were to stand before our peers, Dr. Pinto, and the teachers and present what we were considering to do in the coming days. It was truly academic - our ideas were treated with thought and were given serious criticism to rectify both our projects and our impressions of the scientific method. And then, to sleep. 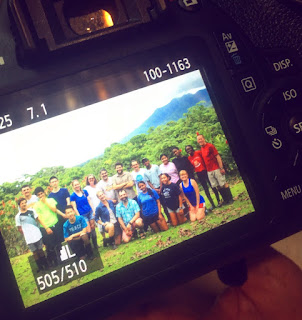 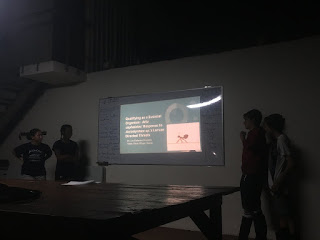 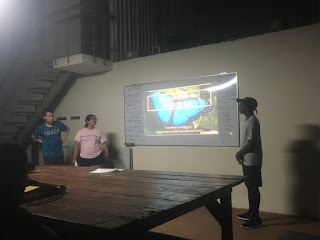 Today was a pleasant day because we had a change of scenery and got a break from the science and went zip lining on the mountain. The zip lining course was fun and most of us got the hang of it by the second rope.

After lunch, we went on a mini hike to find the ant colonies that we will be researching later on in the week. Our collection of the colonies was interrupted by rain towards the end so we quickly finished collecting the fungus gardens and headed back to change for the cooking class.

Once we cleaned up, we went to a cooking class in town and learned to make tortillas, plantains, chicken, rice and beans and salad. After we cooked the food and we all got to enjoy the experience of the local culture.

Finally we headed back to the ranch and debriefed our day in the fields and discussed our ant colonies. We ended the day with a interesting video about a fungus that can control bullet ants.

It was an exhausting day, but we learned a lot about the leafcutter ants and the culture in Costa Rica. 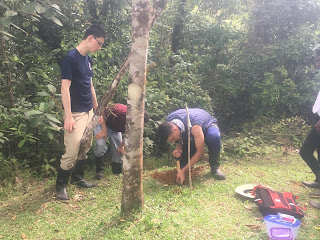 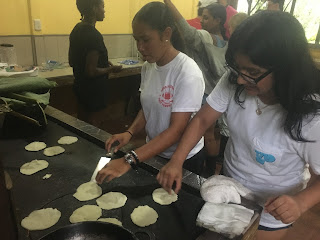 Posted by SG Science at 8:33 PM No comments: